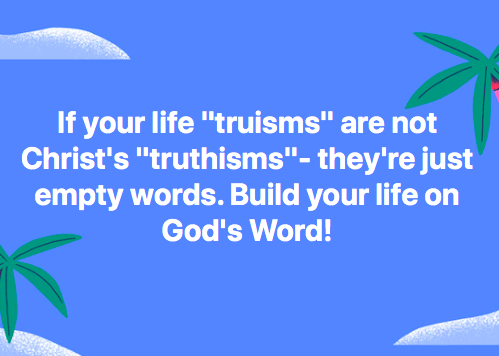 Examples of Churchy Truisms That are Unbiblical:

1. Nobody is perfect.
Violates Matthew 5:48 and the command for all born again Christians to keep the commands of God; because they are not burdensome- 1 John 5:2-3.
2. Christians are still sinners.
Violates 2 Corinthians 5:17 and being made a new creation, a saint of God- Ephesians 1:1, 2:8-10.
3. Only God can judge me.
Violates the command to preach the gospel to all people and use their sin as an example of their need for a Savior- Acts 2:38 & Titus 2:11-13.
4. Not everyone is called to be a disciple making soul winner.
Violates Jesus’ commands in Mark 16:15, Matthew 28:19 and Acts 1:8.
5. My pastor taught me to never tell people about their sin, that’s the Holy Spirit’s job.
Violates the command of Paul in 1 Corinthians 5:12 to judge and enforce church discipline to insure the holiness of God’s people.

Examples of Worldy Truisms that are Self-Refuting:

1. Everyone has their own truth.
Violates the law of non-contradiction because If everyone has their own truth then truth can be contradictory because people’s “truths” are not the same; however, what contradicts itself cannot be true; therefore the statement is illogical.
2. No one religion is right- they all have some truth and should just agree on helping the world.
Violates the law of non-contradiction because If the person speaking has a better knowledge of truth than the religions they are critiquing than their religion of “All Religions are Basically the Same Religion” violates the differing truths of all the other religions. In other words, who picks and chooses among the truths of the different religions and says only “these truths” are true? Therefore, either none of them are right, including the “All Religions are Basically the Same Religion” because no one has the same list of “truths” or one of them is right (because their set of truths is true) and all the other set of truths are wrong- thus either way “All Religions are Basically the Same Religion” can never be right.
3. I think everyone should just mind their own business.
Violates the law of non-contradiction because the person saying it is not minding their own business but telling everyone how to handle their business.
4. I only believe in science.
Violates the law of non-contradiction because the statement itself, “I only believe in science” is not testable and known via the scientific method, it is a personal opinion.
5. As long as what you believe doesn’t hurt anyone I think you should be free to live however you want.

Violates the law of non-contradiction because if a person believed they weren’t really hurting “anyone” (i.e., “a person”) they could live however they wanted. For example, slaves owners justified their abuse of African slaves because they didn’t believe they had souls, thus they weren’t capable of feeling pain like a person.

Matthew 7:24, “Therefore everyone who hears these words of mine and puts them into practice is like a wise man who built his house on the rock.”

From Shaking to a Great Awakening 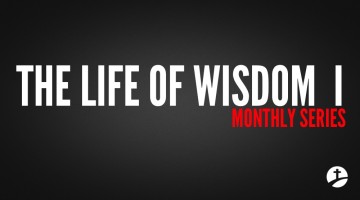